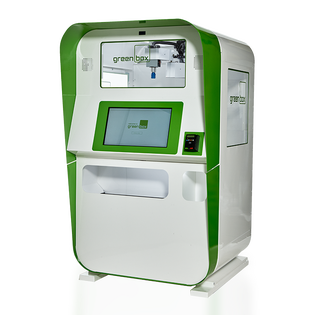 Infamous CFBro Gary Vee once said at Hall of Flowers that “cannabis is the new dot com boom.” He was close. Cannabis technology is actually the new dot com boom. While some new industrial inventions in the cannabis space seem as utterly gigantic and superfluous as an everlasting gobstopper maker, the sleek and streamlined greenbox will make a huge difference in dispensaries. Think of it as a BTM, an automated budtender machine.

Imagine if the always-frustrating arcade claw that never manages to pick up and dispense a prize, suddenly morphed into a machine where the user always wins.

The kiosk’s touch screen, graphical user interface divides products into edibles, flower, oil and so forth. Customers browse and choose the products they wish to purchase. Next a robotic arm selects and dispenses the items once the payment is completed, by tapping out with a cel phone’s Apple or Samsung pay. In under three minutes, a greenbox customer is out the door with his products.

The greenbox cannabis-dispensing kiosks are the brainchild of creative CEO Zack Johnson, a former music industry executive from Massachusetts, who signed hip hop recording artist Boston’s Boy Sammy Adams in 2010. Johnson thought of the idea to create a BTM, while waiting on a long line at a dispensary.

After a two year period of design, research and development, and trial and error, his perfected machines made their debut at Erba Collective dispensary in California, on January 10th, 2019. So far, greenbox has generated approximately 20k in revenue for Erba Collective within a month. The dispensary refers to greenbox as “Erba Express Checkout, Powered by greenbox Robotics.”

Not to be content to rest on his laurels as the orders flow in, Johnson is always tinkering with improvements to his boxes. He is currently considering building an app that allows customers to learn about new products, view purchase history, order ahead, and sign up for a rewards program.

In addition to greenbox, the company also created a blue box, dubbed the Marinabox, for its striking marine blue color.  While greenbox dispenses THC products, its counterpart Marina dispenses CBD only products. Select liked the concept so much, they co-branded some marina boxes for an upcoming Vice magazine party at the SXSW conference and festival, in Austin, Texas.

After SXSW, the Marina deserves a place in Le Grand Palais’ Artists & Robots exhibition. Although, Johnson envisions a more ubiquitous future for Marinabox, with machines in airport terminals, shopping malls and hotels around the world.