In North America’s hemp industry, 2019 may be remembered as the year that the CBD craze hit its peak.

The obsession with growing hemp for CBD, or cannabidiol, was impossible to miss at farm conferences and hemp trade shows across North America last year.

Jeff Kostuik remembers the enthusiasm for CBD at those meetings, particularly in the United States.

At those shows he normally polled the audience, asking attendees if they were growing hemp for CBD, grain or fibre.

“Last year, 99 percent (of people), plus whoever’s dog was sitting next to them… said they’re growing for CBD.”

The situation was similar in Canada.

After producing hemp mostly for grain, for two decades, Canadian farmers leapt into the hemp CBD business. There is no official acreage data yet, but hemp for CBD acres likely exceeded hemp for grain and fibre in 2019.

The boom in hemp CBD production was driven, in part, by persistent media stories on how global sales of CBD products could soon skyrocket.

CBD and other cannabinoids are found in the flowers, buds and tissue of hemp plants. Some research suggests CBD oil can treat a long list of health problems, including insomnia, anxiety and pain.

However, there are signs that grower fascination with CBD may be fading.

When Kostuik spoke at U.S. meetings before Christmas, 50 percent of the crowd said they were growing hemp for CBD. The remainder were producing for hemp grain or fibre.

That’s because many growers, especially in the U.S., were told in 2019 that they could make a small fortune growing hemp for CBD.

“It’s built on hyperbole. It really is,” said Ken Anderson, owner of Legacy Hemp, a company based in Wisconsin that sells seed and contracts production for hemp grain. “Everyone wants to talk about this crop I can make $50,000 an acre growing. ‘How do I get involved in that’?”

The promised returns have proven to be false.

Hundreds, possibly thousands of American growers are stuck with hemp flowers and other hemp biomass that they can’t sell. 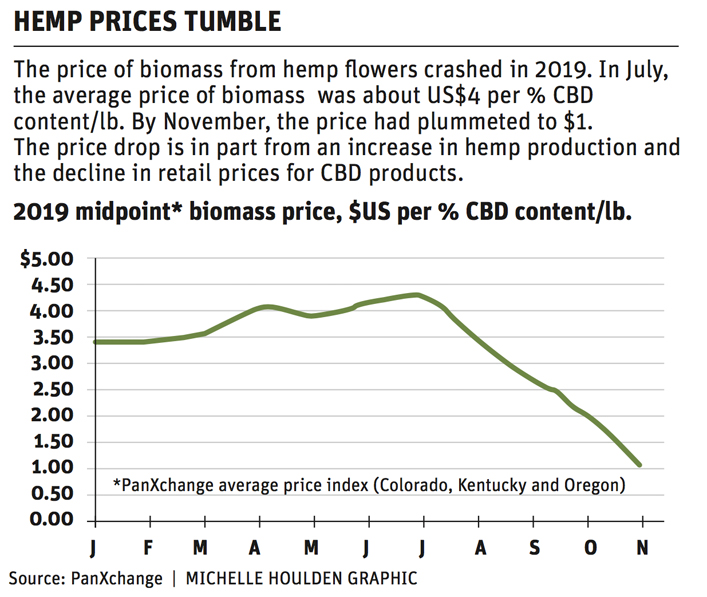 Dan MacLure, a Vermont farmer, told Reuters that he grew eight acres of hemp for CBD in 2019. As of November he didn’t have a buyer.

“It’s heart-wrenching thinking about all the work and money you put into it,” said MacLure, “I’m not sure I’m going to be venturing out in this again.”

Too many producers grew hemp for CBD on speculation, or signed production contracts with unreliable buyers.

“In this industry, it’s always the producer who gets burned,” Anderson said.

“You really need to be an educated farmer, if you want to get involved with this crop.”

There are buyers for the hemp biomass but not at the price farmers were hoping to get, Anderson said.

“If you look at the retail price of CBD products right now, they’re coming down every single day,” Anderson said. “The market won’t bear what these (producers) were expecting (for price).”

A chart from PanXchange, a U.S. market for hemp biomass, shows how the price cratered in the second half of 2019.

In July, the price ( for percent CBD content per pound) was more than US$4. By the end of November it was around $1.

The story is different in Canada, Kostuik said.

In Western Canada, many farmers do have bales of hemp grown for CBD in storage, but the marketing challenges are mostly because there’s a lack of hemp processing.

In America, anybody and everybody was starting up a company to process hemp for CBD.

Therefore, there were and still are fewer buyers for hemp biomass.

“(The) tardiness of Health Canada getting those licences out, has slowed down the enthusiasm,” Kostuik said. “I don’t think there’s enough processors available to do it…. If there are, they are maybe looking for something with a higher percentage of (CBD in the biomass).”

While growers may back away from the crop, the CBD craze has not gone away.

“When people think of hemp in America right now, that’s what they think of. They think of CBD,” Anderson said.

“I kind of have to fight the conflation between CBD and what we’re doing.”

CBD Oil On My Stump 🤯| My Amputee Story